At the best of times, high school is a challenging period of self-discovery where students can make new friends, engage with caring teachers, and learn thought-provoking ideas that expand their view of the world.

But for many LGBTQ2+ youth, high school can be a lonely and isolating experience, especially if they don't feel they have programs, resources or an inclusive culture to help them feel supported and guided through their adolescent years.

That's why an emerging group of LGBTQ2+ youth leaders are taking action and inspiring change to help transform their communities into welcoming, safe spaces for both their peers and future generations.

Three of these leaders are 2020 recipients of the TD Scholarships for Community Leadership, a program that provides funding which is offered to students who nurture progress and contribute to bettering their communities. Each year, recipients are chosen from a pool of more than 80 finalists across Canada and are awarded up to $70,000 per scholarship over a period of four years.

This year, we sat down with three of the 2020 TD Scholarship recipients to learn more about the remarkable work they are doing to help advance LGBTQ2+ visibility and support. Here are their stories: 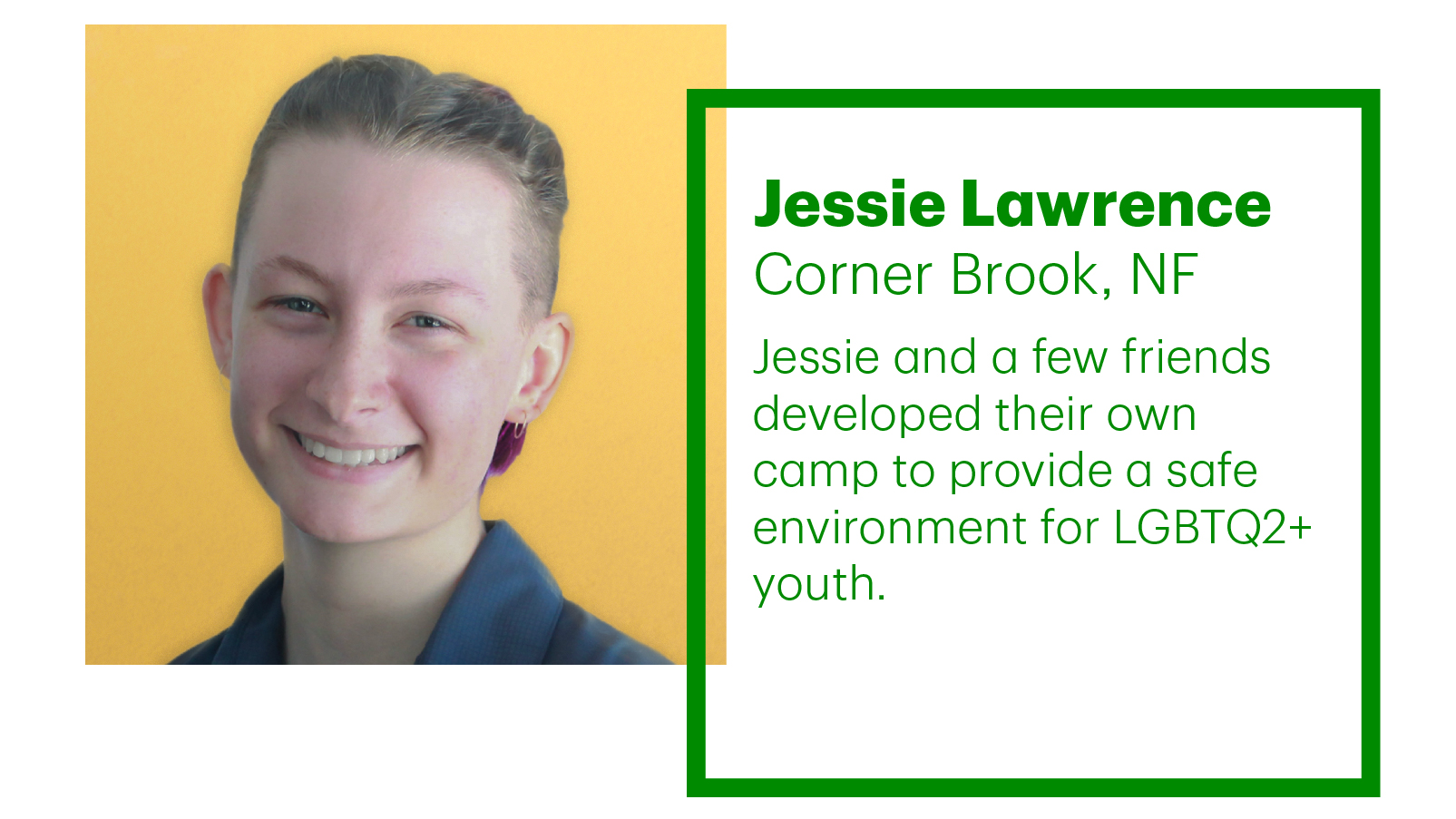 When ninth-grade student Jessie Lawrence of Corner Brook, Newfoundland, and two of their friends showed up to give an LGBTQ2+ workshop they created for grade 11 and 12 students, they discovered some parents had kept their kids home from school that day to prevent them from attending the presentation.

Lawrence recognizes that many rural communities are “traditional" and as such, don't provide health and informational resources for LGBTQ2+ youth. Such barriers are why so many LGBTQ2+ people, especially those in smaller towns, might struggle with the feeling of belonging.

While the presentation didn't go as Lawrence hoped, some good did come out of it. Afterwards, Lawrence met with a few of the attendees, and after discussing the lack of resources, Lawrence decided to create a camp to provide a safe environment for LGBTQ2+ youth in the community.

From there, Camp Ohana was born.

Not really knowing where or how to begin, Lawrence started working on their mission.

“We had zero dollars and needed $20,000," Lawrence said. "We began fundraising with craft fairs, received donations and grants, then bigger grants."

Lawrence secured the necessary permits, recruited volunteers, created a board, and is now in the process of incorporating.

For the past two years, Camp Ohana has hosted more than 50 motivated campers aged 14 to 18, and 26 volunteers at the four-day/three-night event.

“We're in our third year, and the ultimate goal would be to reach a point where a camp like this [is] no longer needed," Lawrence said.

“When I was first applying [for the scholarship], I thought it would be nice to be recognized for all the work I've accomplished," Lawrence said.

“But the main goal is to do the work because it just needs to be done." 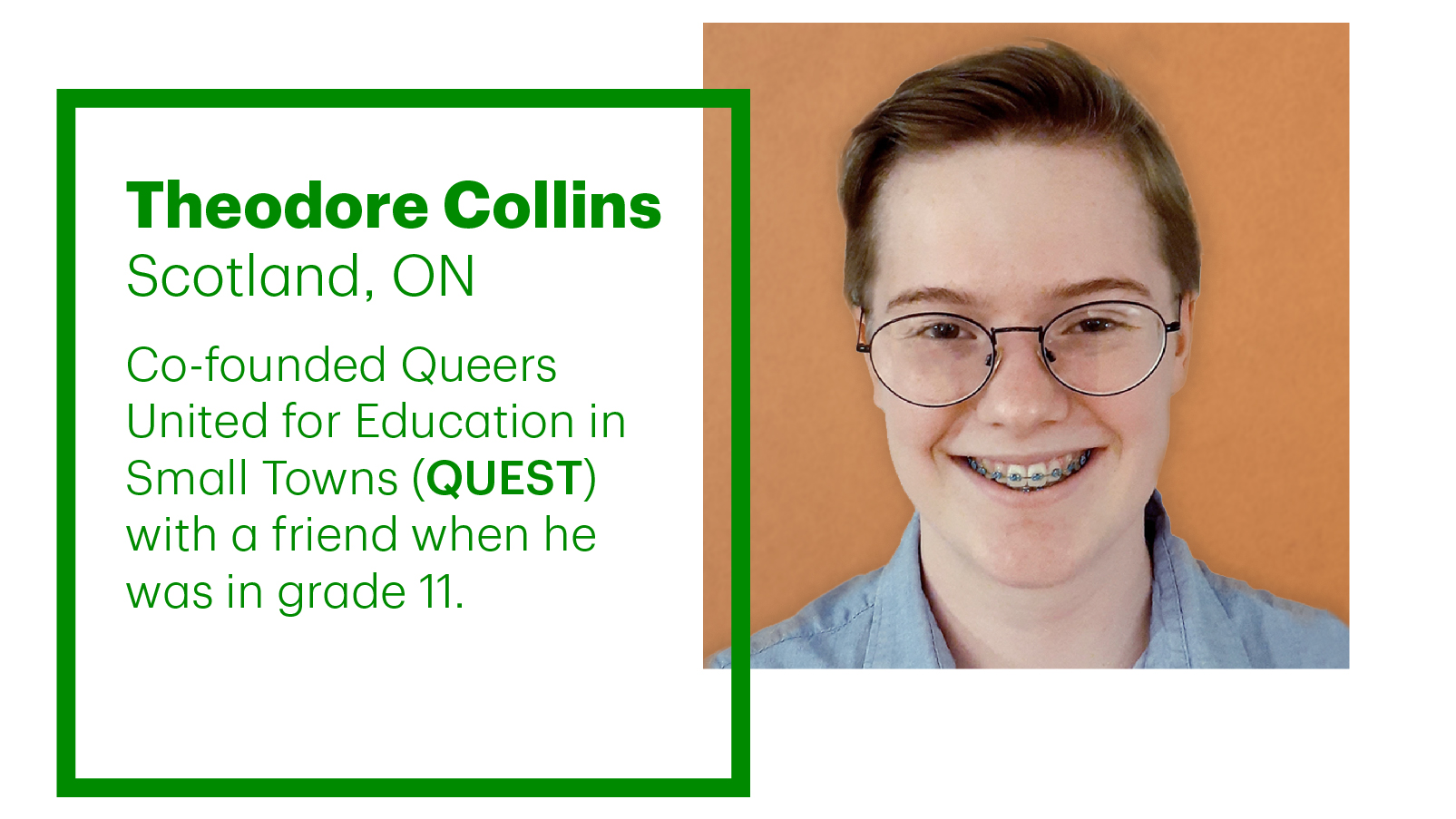 Theodore Collins of Scotland, Ontario, co-founded Queers United for Education in Small Towns (QUEST) with a friend when he was in grade 11. During Pride Month last year, the organization hosted a ceremony at his school where the Mayor, David Bailey came out to speak.

Collins personally felt the participation of Bailey, the first openly gay mayor in Canada, who spoke about his lived experiences as a part of the LGBTQ2+ community, was particularly impactful.

“The history of the LGBTQ2+ movement isn't taught in schools as far as I know, and there are no obvious role models as many older members of the community choose to hide that part of their identities," Collins said.

Through QUEST, Collins has held pink shirt days, hosted awareness campaigns on National Coming Out Day, and lobbied for resources for transgender youth, including adding more gender-neutral bathrooms to his high school. Collins said his principal and the school administration have been supportive of QUEST, and the student members are highly engaged.

“With this scholarship, I hope to let the LGBTQ2+ community know their successes are meaningful and that they don't have to sacrifice their happiness or the chance of a positive life by coming out and being who they are," Collins said. 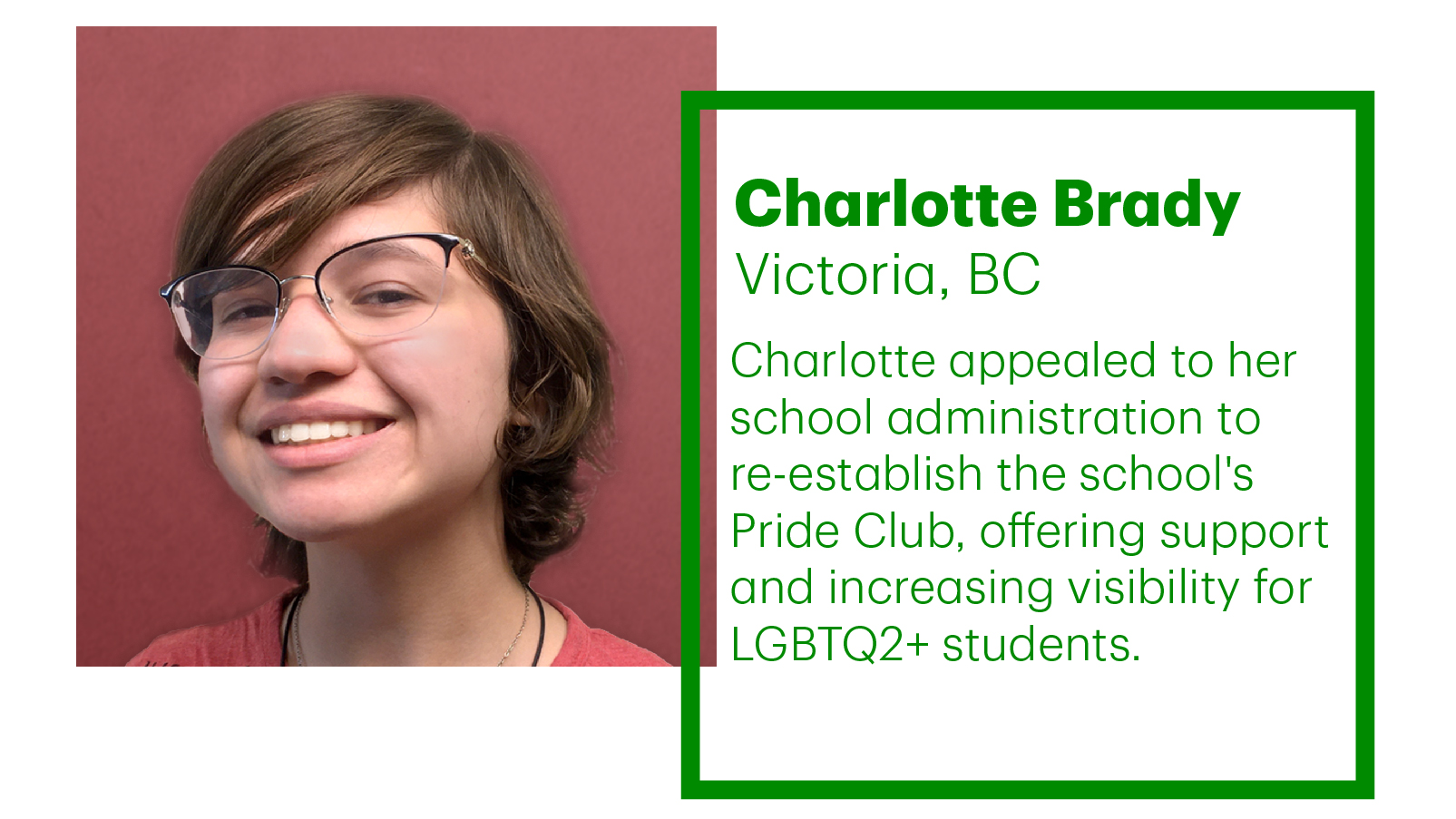 While Charlotte Brady's Victoria, British Columbia school had a Pride Club, she grew disappointed when the teacher running the group left. Recognizing there were still students who needed resources to support them, Brady approached the school administration to re-establish the Club.

In the same school, there was also a group of three students – the Equality Club – who were tackling issues such as social justice, poverty, women's rights, and racism. Brady helped merge the two groups, and the Pride and Equality Club was created.

The newly-created club increased its visibility by hosting Pride events and tackling issues such as gender-neutral bathrooms, the use of pronouns, and how to talk to friends who were questioning their identity.

“People feel comfortable coming to talk to us about these issues, knowing we'll support them," Brady said. “Fortunately, that's the contribution I'm going to leave behind."

Brady's dream was to attend the University of Toronto to become a criminal defense lawyer in social justice, and the scholarship is helping to make her dream a reality.

“My life's purpose is to combat injustice and I'm excited to do as much as I can to work towards not just tolerance, but genuine, true acceptance," Brady said.

About TD Scholarships for Community Leadership

Thanks to the TD Scholarships for Community Leadership, these three recipients will be able to focus on their studies while continuing their volunteering and social justice activities in their communities, without the added pressure of having to seek paid employment to cover their tuition.

The TD Scholarships for Community Leadership has reached a milestone achievement this year by awarding its 500th student recipient with a scholarship, amounting to a total of $25-million in scholarship donations since 1995.

Have you shown exceptional initiative in making a meaningful and lasting difference in your community? Then we want to hear from you, as you may qualify for one of our Community Scholarships. Visit the TD Scholarships website to learn more.

Want to learn more about Community?
TD aiming to inspire dialogue with art collection
Financial Literacy Month: Supporting financial literacy in the Cree Nation of Chisasibi
7 emerging artists from the Indigenous community to listen to now