TD is proud to employ more than 85,000 individuals across North America and around the world. Whether working from home or in our branches and offices, our colleagues have stepped up in remarkable ways to help our customers during the COVID-19 crisis. In our latest Meet TD series, we introduce you to some of the extraordinary people at TD who are providing valuable services and critical support for our customers, colleagues and communities.

Vanig Garabedian is no stranger to challenging times.

Just a few years ago, he and his family fled war-torn Syria, arriving as refugees in Canada on December 10, 2015. They were on one of the first flights of Syrian refuges to land in Toronto from Lebanon.

"We were privileged to have Prime Minister [Justin] Trudeau greet us at the airport," Garabedian said. "Being met by the head of the government gave us a great sense of dignity and was an overwhelming welcome to our new home. It inspired me to want to give back to my new community."

Garabedian soon found a job at TD Insurance as an Accident Benefits Claims Analyst that enabled him to provide for his wife Angelic and the couple's three daughters. Four years after arriving in Canada, the family became Canadian citizens.

Although he has enjoyed his time at TD, Garabedian always longed to return to his chosen profession: medicine. In Syria, he was an obstetrician and gynecologist who oversaw more than 15,000 deliveries and surgeries over a 16-year career where he served as the medical director of one of the biggest hospitals in Syria.

Now, as health care systems across Canada work to treat patients suffering from COVID-19, Garabedian is hoping to once again don his scrubs and play his part in the response to the crisis.

"Medicine is not a job, it's a passion," he said. "It's a way of life for me. Once people are in need I feel compelled to help them – to ease pain and save lives."

Unfortunately, due to policies that restrict internationally qualified doctors practicing medicine in their newly adopted home countries, Garabedian has not yet been able to return to practice.

However, The College of Physicians and Surgeons of Ontario recently began issuing short term licenses, known as Supervised Short Duration Certificates, that allow some foreign-trained physicians to practice if they can secure a medical supervisor. 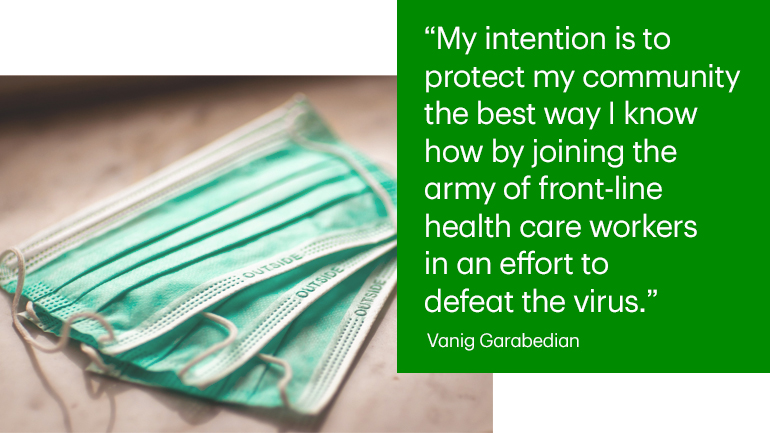 Garabedian said he is in the process of applying for one of these licenses, and that he sees his temporary return to practicing medicine in a time of crisis as his civic duty, and a way to give back to the community that welcomed his family in their time of need.

"Right now, COVID-19 is a viral invasion on Canada," he said.

"I'll be defending my community against COVID like a soldier defending his country. I am experienced in crisis and emergency settings. My intention is to protect my community the best way I know how by joining the army of front-line health care workers in an effort to defeat the virus."

Returning to the front-line temporarily will require Garabedian to take a temporary leave of absence from TD.

"I am extremely proud of Vanig and his commitment to supporting the community in this time of need," said Julie Hubble, Associate Vice President, Bodily Injury & Accident Benefit Claims, TD Insurance.

"We are fortunate to have him on our team at TD Insurance and look forward to supporting him on this heroic journey."

In order to practice medicine in Ontario, Garabedian must secure a medical supervisor, something he has so far been unable to do.

Still, he remains confident that he will be able to find someone to act as his medical supervisor. This isn't the first time Garabedian has faced obstacles to practicing his calling.

In 2013, two rockets hit and destroyed his clinic in Syria.

"There was 15 minutes between me and those two rockets," he said.

"When I got the call that my clinic had been destroyed, my colleague was surprised by my reaction – I told him that it was time to celebrate. Celebrate the fact that I was safe, that my loved ones were safe. I told him that I built the clinic, I could rebuild it."

As he looks to secure his return to medicine, Garabedian says he and his family are remaining positive, even in the face of all the challenges and uncertainty many people are facing as a result of COVID-19.

"I encourage everyone, all of my TD colleagues, to look for the positive in the current situation – even though it is an incredibly difficult time," he said.

"Look to the positive part of staying home and practicing physical distancing. We will get through this together."

Want to learn more about COVID-19?
Meet the woman running one of the busiest TD branches in Canada during COVID-19
Meet the TD colleague helping customers through their COVID-19 financial hardships
TD committed to employing summer interns despite COVID-19