As we head into the holiday season and people take time off to enjoy time with their families, we're republishing our Top 10 stories from the year. We hope you enjoy.

This story was originally published on June 1, 2022.

It was the scariest time in Eddie Valentin's life.

The Friend's Tavern owner and local Queens legend was laying in bed in March 2020 suffering from COVID-19 at a time when so much was unknown about treating the new illness.

"I'm stuck in bed and I feel like I'm dying of COVID, my husband also had COVID and was really bad and of course we couldn't let anybody come over and help take care of us. So, we were taking care of each other, but it was incredibly scary," Eddie said.

While dealing with this potentially fatal illness, Eddie tried to focus on his life's work.

For the past three decades, Eddie has helped to build and then own Friend's Tavern in Queens, an LGBTQ+ safe haven and legendary bar that has inspired and supported the Latino community in the area and beyond.

So, while he was battling COVID, Eddie decided to look at possible real estate. The small business owner had been trying to buy the building Friend's is located in for years to no avail, so he was seeking other opportunities.

"I said let me look into this other building for sale to see if they'll sell to me," he said. "And to my surprise, when I opened the listing, it happened to be my bar, my building that was being sold. I can't get out of bed. I have a 103 fever. And here on top of that, I see my building's being sold. That's everything. Friend's is my baby. That's my lifeline."

An embattled Eddie got on the phone and started making calls. After finding out what had happened regarding the sale, he would spend the next six or seven months negotiating with the building owner to sell to him and keep the property in the Friend's family.

It was just the beginning of his journey in purchasing the building. 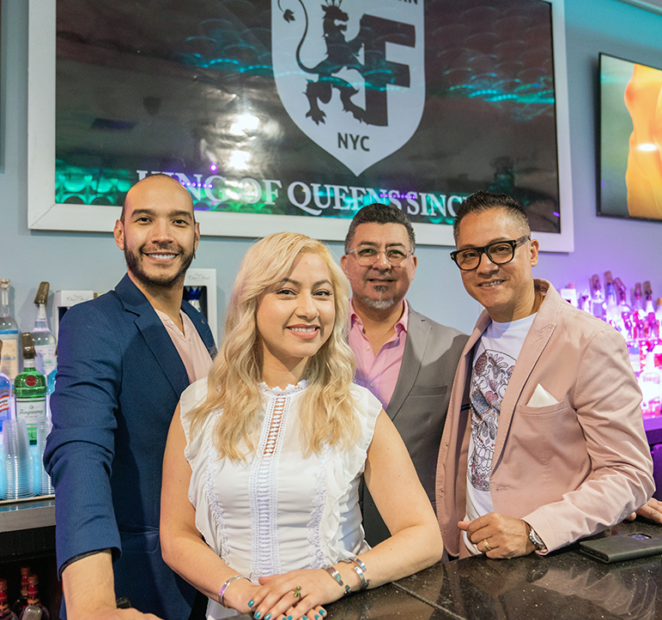 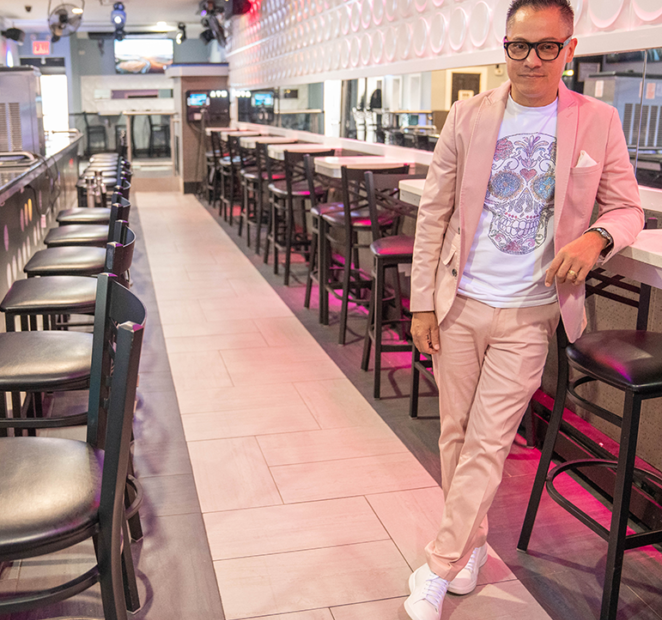 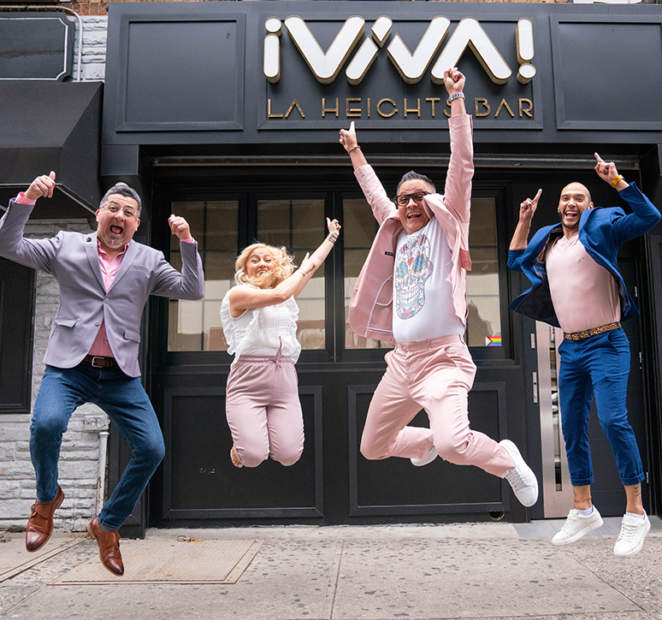 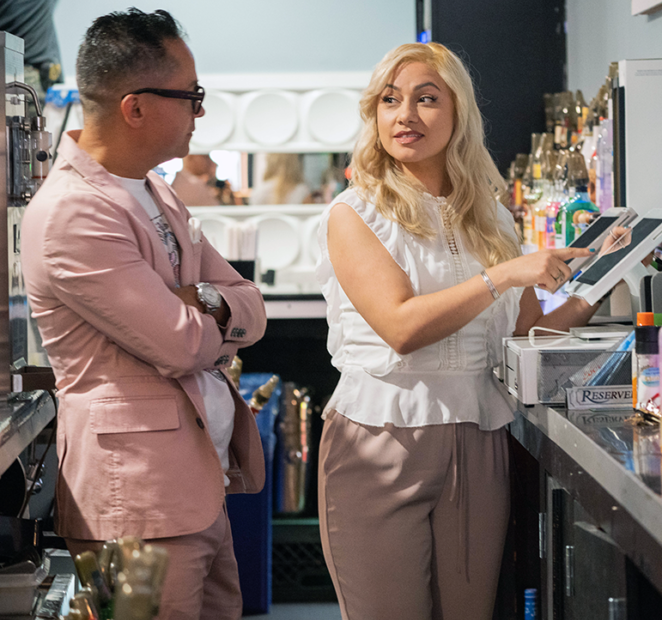 Friend's Tavern is the oldest gay bar in Queens, located in Jackson Heights on Roosevelt Avenue, and has been in business since 1989.

A community hub, particularly for the Latinx queer scene, Friends was started by Casimiro Villa. Eddie started to frequent the bar just a few months later.

"In those days, no money was put into LGBTQ+ bars," Eddie explained. "The bathrooms were all insanely horrible. Everything was falling apart, the lights weren't working, but these were the type of bars that the LGBTQ+ community was given because it was sort of a last resort type thing that you would do with your business – turn it into a LGBTQ+ friendly place."

In addition to bathrooms and lights, Eddie says LGBTQ bars three decades ago also had issues like the refrigerators hardly working. Warm beer was the norm, but a warm and safe place for the community to come together was not.

There was also a growing Latino presence in Queens, and Villa wanted a place for people to meet and be themselves.

"He decided that he wanted to make a difference. So, he took over the bar and with the little money that he had and started fixing it up," Eddie explained. "But he also had this idea of bringing people from different walks of life together."

Villa wanted a place where the American clientele could be happy because they were hearing music in English, and where the Latino clients could also be happy and hear music from their culture.

When Eddie started to come into Friend's as a patron, he was working in NYC for the United Nations, but his passion and creative ideas caught Villa's attention. He had a young, modern eye and well before it was popular, suggested little changes like modern music and hipster vibes.

More than 10 years later, Villa decided to retire and knew who the perfect person was to carry on this incredible legacy.

"First thing I did was I started making renovations and revamped the whole place," he said. "I added more beers to the menu. So eventually, you know, we were getting a younger crowd in along with the older patrons."

He also started to give back to the community and work with local nonprofits – something Friend's would later become famous for.

The Battle to Save Friend's – TD Enters the Frey

After the building's owner decided to sell to Eddie in 2020, he gave him three months to close the deal.

"The first thing I did after they told me I could buy the building is I start working with a bank where I've been banking for 30 years," he said.

But to Eddie's complete surprise, his former bank didn't approve the loan because sales were down in 2020 due to COVID.

"That's when I got very depressed, I started crying and I was like, 'God, Give me the strength,'" he said,

Eddie spoke to community and political friends who put him in touch with Steve Garibell, TD Bank's Head of Business Development for the LGBTQ2+ Community.

"Steve immediately knew Friends," Eddie said. "'I know your bar; I love your bar. It's a great bar. And we cannot lose that bar,' Steve told Eddie."

Steve and Eddie worked round the clock to get paperwork in order, connect with the Small Business Administration and get a lease extension from the current building owner.

Even with that extension, the clock was ticking.

"We didn't have a choice. I wasn't going to lose this. It's not just me losing my business. It's the community. They couldn't lose this bar," Eddie said.

Before the pandemic hit, Friend's didn't close a day under Eddie's leadership. During the NYC blackouts, Superstorm Sandy and so many other historic events, Eddie made sure Friend's was a place for people to come and feel safe and at home.

"Friends is about the community. It's like a community center that never closes," he said.

Then, something incredible happened. About four months after connecting with Steve, Eddie closed on the building in October 2021. TD had been crucial in getting Eddie the loan he needed to make his dream a reality.

"On the street now, when people recognize me, they're like, oh my God, Eddie, you just bought the building. Thank God. God bless your building," he said.

Owning his own thriving business and his own building is something Eddie never imagined.

"I'm a son of Puerto Rican, not immigrants, but migrants because you know, my parents were the pioneers who came to New York in the 1940s," he said. "I was born here, and we became a part of what the American dream is all about." 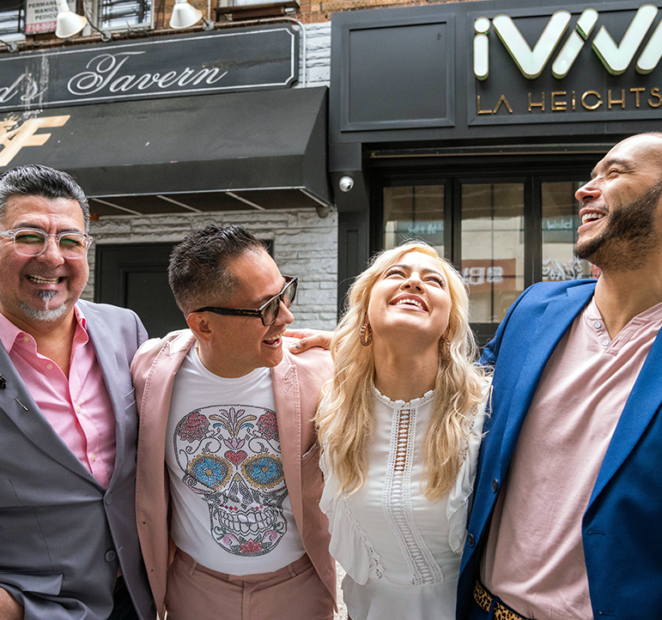 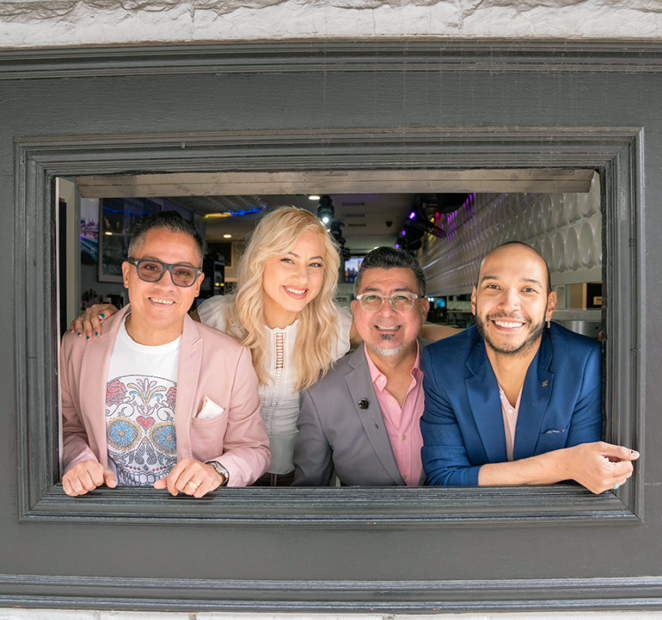 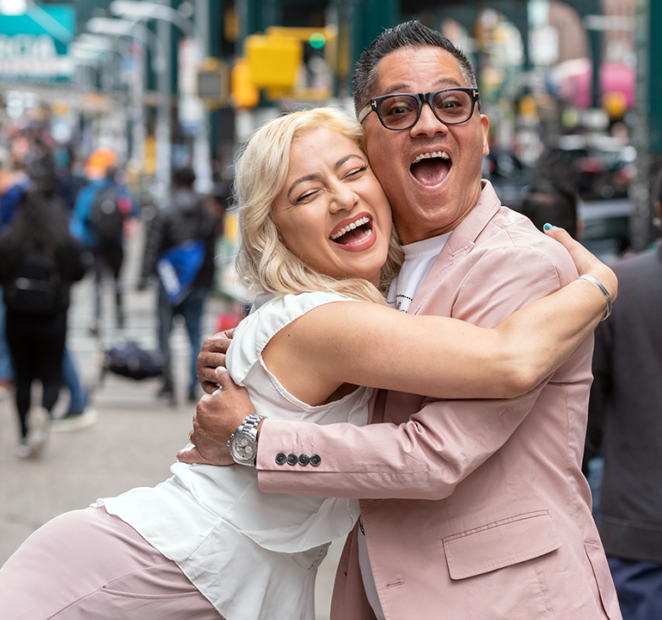 In addition to the patrons and Friend's staff and family that is relieved by the purchase of the building, the community in Queens is overjoyed that their favorite local watering hole is going to be around for years to come.

In the 1990's, Eddie started to work with nonprofits and give back to the community.

"We were the first sponsors of the Queens Pride Parade," he said. "Nobody believed in the parade. And everybody said that a parade in the outer boroughs would never work, but we were going to make sure it worked. Queens had to have a face in the LGBTQ+ community."

Other bars in Queens followed Friend's lead and soon the avenue had lots of LGBTQ+ bars but there was still intolerance.

"We had a couple of murders in the neighborhood and that's what rallied us to make the parade what it is today -- to get the community more open and more diverse, the community was diverse already," he said.

The parade was a protest to what happened – the murder of innocents from the community. Friend's called on local city officials and other organizations to create this historic event.

"It was all about awareness," Eddie explained. "Let's make sure that our neighbors can see us walking hands in hands. Let's make this be a reality where they can see this so often that it's going to be the norm."

The Queens Pride Parade has been around now for 30 years and the community couldn't imagine life without it.

Around this time, Friend's also started to volunteer space to local nonprofits helping people in need.

"We were one of the first bars to do HIV testing and counseling right in our business. The Gay Men's Health Crisis reached out to us," Eddie said. "We would have to scrub the areas down, put chairs down, pull the curtains, close things out, so people could get their HIV testing."

"We are like an LGBTQ+ Cheers," says Eddie's niece Amber, who happens to also be Friend's General Manager.

Amber says that Friend's is much more than a bar to patrons, it's like a second home.

"An incredible thing about this business is how many people have met and fallen in love here," she added. "It's amazing to imagine how many people met here because we created a safe haven for them."

"I'm in my fifties now and recently got married. And my husband is about to retire, and I was like, how can I semi-retire by having somebody that I can trust 100% in the business?" Eddie said. "I didn't have to think twice about it. Amber is like my daughter. They've been coming to this bar since they were kids."

Eddie said who better to guide Friend's through the next 30 years.

"It's somebody you can trust, somebody who knows the community and is hardworking. Somebody who, you know, has a good level of education and matching experience. So, you know, it's almost like my mini me," he said. "Friend's is in good hands."

Want to learn more about 2022 Top Stories?
Making a Point: TD Pens are Now Made from Recycled Water Bottles
Join our newsletter